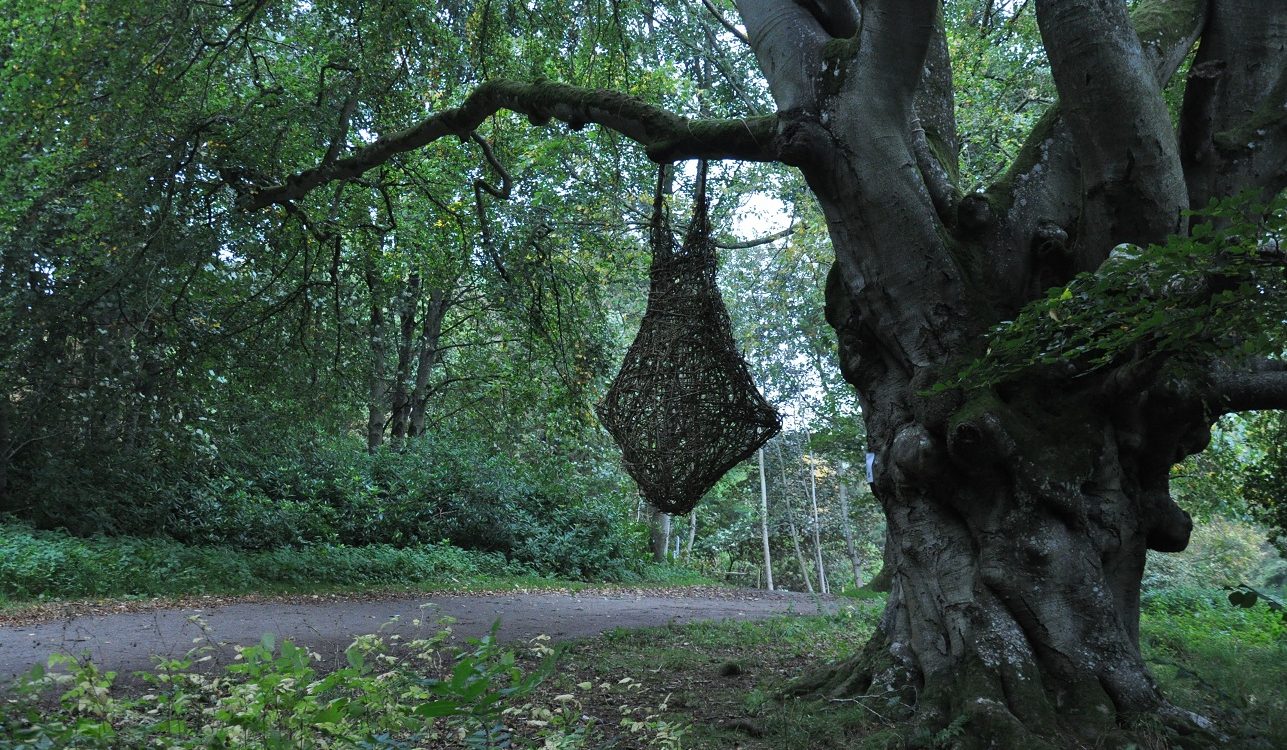 In the summer of 2017 I was one of the artists who were invited to create a sculpture for the Haddo Arts Festival which would be held in mid-autumn.

The artists were given the opportunity to create works which used as a starting point the poem ‘Like Our Bodies’ Imprint’ by Yehuda Amichai. A key element of the project was to create a sculpture from natural, bio-degradable materials to allow the artwork to “decay back into the landscape as part of the ongoing cycle of Nature, leaving no lasting environmental impact but continuing to exist in the memories of those who have experienced them”.

I was particularly drawn to this because I’m interested in environmental issues and so that posed an interesting challenge for me as an artist.

The art festival would take place at Haddo House Country Park. I had never been there before so the first step was to explore the grounds and absorb the sights and sounds.
It was on this first visit that I became aware of the bat colony at Haddo House.

I was surprised when somebody showed me a bat hanging on the wall in the courtyard in the broad daylight. It had been found inside the building and moved to a safe place, so I was able to have an unusually close look at it and take photographs of this beautiful creature.

The National Trust for Scotland regularly organizes educational talks about bats at Haddo. Coincidentally, there was one that very evening. I decided to stay for that and it was fantastic. We learned about different bat species and their behaviour, and then later at dusk outside in the courtyard we witnessed hundreds of bats emerging from their roost. With the help of bat detectors we were even able to hear their normally inaudible calls.

It was an unforgettable day, especially since it was my birthday and this felt like the perfect present. I already knew on the way home that this would be my inspiration.

Bats are very small, nocturnal, fast moving and they hibernate for several months. Therefore most people are not really aware of them. I wanted to contrast this sense of invisibility and their tiny, fragile shapes with an artwork which would create a different kind of mystery by its large scale.

When bats go into hibernation, they tuck themselves into their wings and form a very simple but distinct shape, almost like a cocoon; they become cold and stiff. In German, which is my native language, this is called WINTERSCHLAF (winter sleep). So my idea which was starting to develop, based on the shape of the hibernating bat, was along the themes of sleep, death, re-birth, re-awakening from hibernation and the way nature’s cycle continues.

In order to create a large-scale sculpture which would be a self-supporting structure, I decided to work with green willow. This would also be lightweight and allow me to hang the sculpture from a tree in the park.

This short video shows the making and installation of Bibo Keeley’s sculpture WINTERSCHLAF:

I really enjoyed the journey from the inspiration through to the making of the work. I chose a beautiful old tree to hang the sculpture from. I used biodegradable jute rope for this and installed it with a lot of help from kind people and a long ladder. I felt a sense of joy and creative satisfaction when my sculpture (main image) was finally in situ.

Before and during the Haddo Arts Festival I had the opportunity to get to know some of the other participating artists.  On several occasions I had interesting discussions about ideas for future art projects with one of them, Neil Kellas.  So the next time we saw a call for artists for a public sculpture in the North East of Scotland, we decided to work on this project together.

Our proposal this time was in response to the Mither Tongue Sculpture Project in Keith, Scotland’s first Scots Toun, and proposes a public sculpture which will highlight the beauty and importance of the Scots language. I am very happy that our proposal was well received and is currently one of three which were shortlisted, as I write this in in March 2018.

This exciting development is the result of a collaboration which would not have come about if it hadn’t been for our participation in the Haddo Arts Festival.

In the meantime I have also been invited to show my own solo art exhibition MOTHER OCEAN at the Old Pheasantry building at Haddo House Country Park.  It will be co-hosted by North East Climate Week and Aberdeenshire Council in March 2018. The exhibition addresses environmental issues through photography, some performance-based video pieces and an installation using discarded plastic marine litter from Aberdeenshire beaches.

So the participation in the Haddo Arts Festival in 2017 was exciting and rewarding, and also subsequently led to further opportunities for me as an artist.  I would like to express my gratitude for the opportunity to take part, with special thanks to the artistic director John Cairns, Administrator Dr. Cathy Guthrie, and Suzanna Atkinson at Haddo House & Country Park.