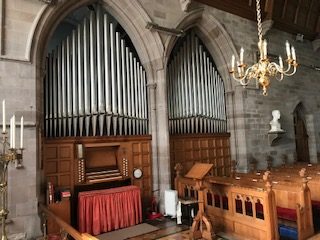 The fine organ in the Chapel at Haddo House was built by Henry ‘Father’ Willis – the most renowned of British organ builders of the nineteenth century. An entry in a Day Book in the Haddo archives for May 30th. 1881, records ‘railway carriage of Organ from London, for Chapel ‘ at the cost of £39.16s.11d -a considerable sum.

The instrument is of three manuals (keyboards) and pedals, comprising 24 stops – 7 on the Swell, 7 on the Great, and 7 on the Choir with 3 on the pedals. It is fitted into the south side of the building, from where the sounds are clear and resonant. The organ has one highly important quality; unlike many other organs by this maker, this instrument has not been altered since it was installed,  thus producing a genuine Willis sound, by turns colourful and exciting,  with an overall singing sound.

The organ is in regular use – a tribute to the original builder, as also to the way it has been maintained – and will be heard at this year’s Harvest Festival Service on Sunday October 6th.