Jean Paul Baptiste: I Am An Immigrant 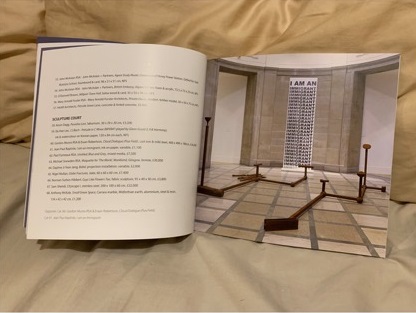 Jean Paul Baptiste’s piece “I Am An Immigrant” was displayed in the South Wing Courtyard as part of the Experimental Use of Space: Connections exhibition at the 2019 Haddo Arts Festival and was later awarded the RSA Open Prize. We asked him to tell us how and why he came to create the work.

As an immigrant and  a person of colour I wanted to be able to address the meteoric rise of the Nazi-esque right wing globally in the age of misinformation, propaganda, xenophobia  and intolerance.

I seldom usually use text or typography as a medium, but in this instance I felt it was necessary to convey my message.

As an artist, my work is a commentary of social and political issues that reflect my own experience.  I will never  know how the work is received in the mind of the observer, I can only tell you how I feel. I wanted to make something that would reflect visually how I felt as an immigrant.

The word ‘immigrant’ is usually used in a defamatory or derogatory context. As an immigrant you hear that word over and over again until you believe that it completely defines you irrespective of your other attributes.

And hence the word immigrant is repeated over and over again.

I wanted the artwork to stand out and be jarring so people would take notice, just like they do with anything that does not fit in with the norms of social homogeneity.

It was my intention that the work evoke a feeling of always being an outsider and alienated by the crowd.

It is intended that the artwork is hung at a height of three metres which is a good amount taller than the average person.  I wanted the work to stand tall and proud and in doing so force the onlooker to have to look up at it. There is no need for a immigrant to have to integrate or conform to  social or cultural norms just to  have the right to live in peace.

These are a few of the many ideas that I considered while determining the  direction of the artwork.